Symptoms of Bad Alternator Seal in a BMW in Carrollton

Symptoms of Bad Alternator Seal in a BMW in Carrollton

Along with being extra diligent in the maintenance and routine vehicle inspections, it is important to understand the warning signs of a failing alternator seal before it becomes a major mechanical problem. Some of the symptoms may be rather subtle at first but can lead to more extreme warning signs such as your vehicle not starting at all because the battery is dead.

Oil Leaks
One of the most common early signs that your BMW’s alternator seal is bad is oil leaks. Since the alternator seal is what is stopping engine oil from getting into the alternator, if the seal is broken or cracked then oil will likely spill out. You may notice the scent of burning oil when you are driving or even notice bluish smoke coming from the exhaust. When your vehicle is parked even for a short time, you may come back to see a pool of dark-brownish liquid pooled near the front part of the car. Oil leaks can be caused by a number of mechanical issues, but a broken alternator seal is one of the more commonly found in BMW’s.

ALT or GEN Light
Most BMW models will be equipped with an alternator malfunction indicator on their gauge cluster. If there is something wrong with the alternator, such as the seal, then it is likely that it will be illuminated. If this comes on, it is recommended that you get it looked at by a trusted mechanic as soon as possible.

Electrical Failures
The alternator is in charge of redirecting electricity to many automated processes of your BMW. If you begin to notice that things like your radio, dash lights, power windows, door locks, windshield wipers, or headlights are malfunctioning or not working at all, then it could be due to an alternator issue. If the alternator seal is broken or cracked and oil has the ability to leak into the alternator itself, the alternator will be stopped up and unable to generate enough electricity to power all aspects of the vehicle.

Dead Battery
This is a tell-tale sign of an alternator issue. If no lights were left on and the battery goes dead for seemingly no reason, then the alternator is unable to generate and direct power to the car’s battery.

Hard Start or Stalling
The alternator also brings electricity to the spark plugs in order to ignite the engine. If there is an alternator seal leak that is stopping up the generating power of the alternator, then your engine will begin to have difficulty starting or idling.

All of the warning signs that are included above are commonly experienced in regards to a compromised alternator seal and failing vehicle alternator. However, some warning signs could mean other mechanical issues as well. It is best to bring your BMW to a trusted mechanic as soon as you notice something is not running properly to get the problem properly diagnosed and addressed.

Many BMW owners have experienced issues with the alternator seal. This is likely due to the fact that seal and gasket design on most BMW models are brittle and prone to breaking. The alternator seal is made of a rubber material and will eventually start to dry out and begin to crack. With that in mind, it is important to be diligent in vehicle maintenance and have frequent, thorough mechanical checks.

Having a trusted mechanic that you 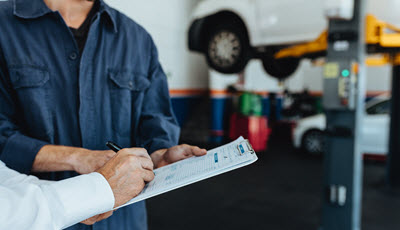 can go to for any mechanical issues and questions makes owning a BMW easy. Knowing where to turn when an issue arises is great, but even better is having mechanics that are able to perform thorough vehicle checks and scans in order to avoid future issues. If you live in or around Carrollton or Dallas, TX, you should consider Ultimate Bimmer Service as your trusted BMW mechanic.